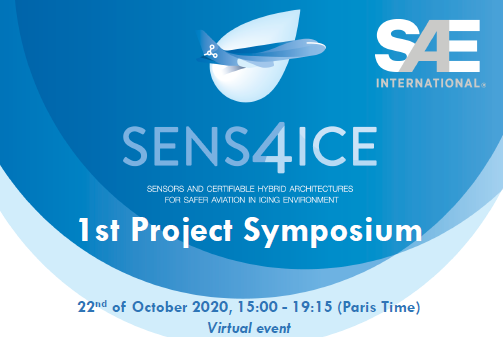 The first SENS4ICE Project Symposium took place virtually on Thursday 22nd of October 2020. It was a public event chaired by the SENS4ICE project coordinator Carsten Schwarz (DLR). The Symposium was an integral part of the SAE AC-9C Aircraft Icing Technology Committee meeting that was held from Monday 19th to Friday 23rd of October 2020.

The primary aim of the Symposium was to present the latest achievements of the project in terms of approach, methodology and technology development to intelligently cope with the complex problem of (SLD) ice detection. Furthermore, the SENS4ICE project is seeking to engage with a larger audience and to encourage open exchange and discussions with fellow experts in this field.

The event proved to be a unique opportunity for the participants to obtain an overview of the recent advancements on the research and technology development scene. 9 presentations were given by the project partners followed by a discussion session on the standardization and comparability of icing wind tunnels for Appendix O (14 CFR Part 25 / CS-25) icing conditions. The Symposium attendees had the opportunity to engage into fruitful discussions and networking with the representatives of research community and industry involved in SENS4ICE.

Due to the integration with the SAE icing committee and the online format of the meeting it was possible to attract a large number of attendees, resulting in more than 130 participants for the Symposium.

The SENS4ICE presentations given by the partners can be downloaded below:

Here below you can find the major questions and answers discussed during the specific presentations of the Symposium:

Question 1: What are the values of LWC on slide 17?

Answer 1: It depends…. For the commercial use it is not. Within the flight test, which is the final objective of the project, it should be ok. The data sheet shows that the piezo ceramics and the adhesives can go down to -60 °C (some adhesives to -40 °C).

Question 2: Which tests do you intend to do with de-icing fluids?

Question 3: Are the Piezo devices susceptible to outside RF energy that could lead to incorrect readings?

Answer 3: They work like antenna and they generate an electric signal to all the vibrations. We work in a frequency range where the noise should be not so high. But additionally, we use bandpass to filter the signal and we can use the averaging. There is an additional protection algorithm we don`t reveal in the moment.

Question 4: What kind of climatic test facility do you seek? Which temperature at the lowest?

Answer 4: We only need a climate chamber or cooling chamber with deeper temperatures than -27 °C. -40°C would be good. -60°C would be great. For the moment, we were looking only around Braunschweig.

Question 1: Sensor Sp is used to derive the LWC. If you change the airfoil AoA, you would need to switch to a different sensor for that purpose. How do you identify the correct sensor to use for the LWC evaluation?

Answer 1: Sensors will be put in the outer and inner part of the FOD sensor profile to have them up and down. Then, the angle of attack doesn’t influence the measurements, because both sensor lines will be evaluated.

Question 2: Is only the icing rate detected or will there be still a detection if no rate change occurs?

Answer 2: Both are possible. If none of the sensors are activated, no ice rate detection will be seen.

Question 3: Did you use bi-modal PSDs for your Appendix O IWT tests?

Answer 3: No, the tests where mono-modal.

Question 4: What about sensitivity to structural vibrations, buffet  turbulence?

Answer 4: INTA: The sensor readings should not be effected significantly by structural vibrations, buffet  turbulence etc. The sensors are isolated against parasitic strains.

Question 5: The testing was done only for FRDZ, how about the FZRA?

Answer 5: Still we haven’t the possibility to test FZRA in our INTA IWT. We are supposed to do them in the NRC IWT tests.

Question 1: Where this device is installed in the test aircraft?

Answer 1: For the ATR-42 aircraft SENS4ICE flight tests, it will be installed in a standard underwing canister which will slightly be adapted. For other aircraft the preferred location is at the front (e.g in the nose) at a position where the airflow is unaffected or only slightly affected by the aircraft.

Question 1: Is there an approach to use it for rotorcraft?

Answer 1: This is not in the scope of the SENS4ICE project as we are in an early stage of development. However, application for rotorcraft might be considered as future development after SENS4ICE.

Question 2: Was SENS4ICE funding conceived only on fixed wing?

Comment 1: It is a pity that SENS4ICE does not apply to rotorcraft, as this research topic is obviously critical for helicopters, too. Maybe some of these technologies or products can be taken into consideration for application on rotorcraft.

Answer 3: Yes. However, this is not foreseen within the SENS4ICE projet, but after the project some of the results might be transferred to other applications or further developed. Of course, SENS4ICE project partners can be contacted individually at any time to exchange on this topic.

Question 1: Why are system engineering modelling activities not done with more open standards? E.g. SysML provides a good open standard to model many aspects and gives an opportunity for a more collaborative exchange airframer - supplier.

Answer 1: Other system engineering tools are being currently assessed.

Question 2: Has HIDS the potential to incorporate Ice Chrystal Icing?

Answer 2: Such potential depends on the direct sensor used and on its performance. Safran sensors have such detection potential, however this is not the case of all sensor types.

Question 1: Was Braunschweig the only EU-based testing facility suitable for the tests?

Answer 1: No, there are also other very capable EU-based testing facilities, however not all could be considered for the SENS4ICE project.

Answer 2: Apart the icing wind tunnels which are part of SENS4ICE, other organisations were contacted, including CIRA. However, other EU-funded projects are currently ongoing on similar topics. Moreover, due to budget limitations, only a limited number of facilities could be involved in the SENS4ICE consortium.

Answer 3: There is an overlap of EU-funded projects SENS4ICE and ICE GENESIS. As such, discussions have started between these two projects. Exchanges are planned best practices and lessons learned for the benefit of all involved partners.

The presentation summarising the main conclusions of the panel discussion will be available soon.

For any further updates we invite you to subscribe to our project newsletter. The sign up form is available in the footer of the website. For any questions or comments feel free to contact us at contact@sens4ice-project.eu

The SENS4ICE consortium takes the opportunity to thank the SAE AC-9C Aircraft Icing Technology Committee for having supported and facilitated the SENS4ICE Symposium.

We look forward to meeting you during upcoming events!