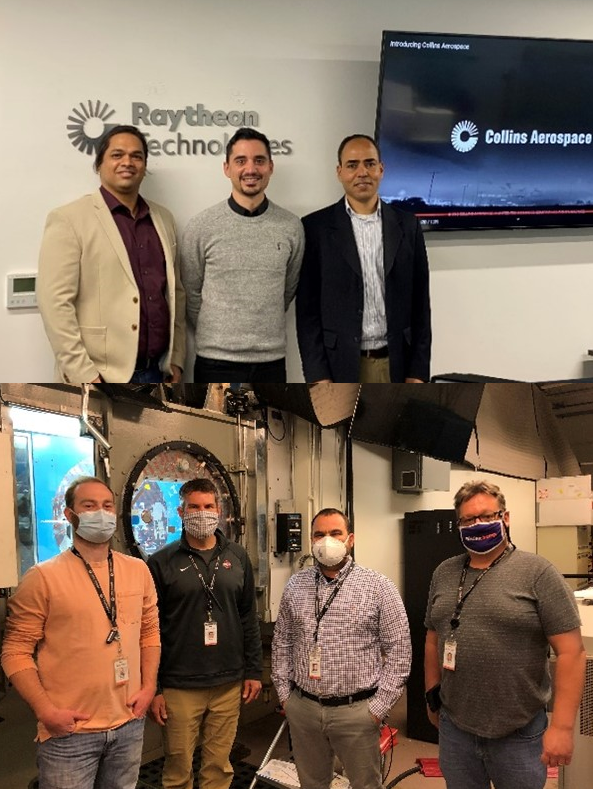 Extensive icing wind tunnel tests have been performed in the project to evaluate the detector’s performance in relevant environment at icing wind tunnel. This icing testing reproduces natural icing conditions in compliance with Federal Aviation Regulation (FAR) Part 25 Appendix C and the extension to Supercooled Large Droplets (SLD) cloud conditions (Appendix O) for design and certification of aircraft subsystems. 28 weeks of testing time have been distributed over four facilities participating in SENS4ICE. The results of these icing wind tunnel tests are providing data for technology selection and development towards natural icing flight tests.

In the SENS4ICE project, Collins Aerospace provides the services of the Icing Wind Tunnel in Uniontown, Ohio. The researchers and engineers involved in these activities tell us how to prepare and perform a successful icing wind tunnel test campaign.

Question 1 (Q1): The icing wind tunnel of Collins Aerospace is one of only a few icing wind tunnels available for outside test services in North America. This state-of-the art facility needed to enhance some technological features to fit the testing requirements set in SENS4ICE. What were the challenges of upgrading the icing wind tunnel to the needs of the project?

Answer 1 (A1): Collins Aerospace Icing Wind Tunnel (IWT) was inaugurated in 1988.  Since that time the tunnel has received several upgrades - from the structure to the cooling system used to maintain the performance required for the airworthiness authorities. The IWT has been used for a number of OEM, FAA, NASA, university, small businesses and internal Collins Ice protection development. One of the key challenges was in achieving the smallest Liquid Water Content (LWC) value possible for the tunnel’s Appendix O conditions. Throughout the process an additional priority for Collins Aerospace was establishing conditions with high Median Volume Diameter (MVD) levels (i.e. MVD > 100µm) in order to capture the most critical aspects of Supercooled Large Droplets (SLD). Achieving these two objectives simultaneously - that is, generating conditions with high MVD but low LWC levels - is a difficult task. Because of this, the tunnel went through a series of studies, analyses and characterization efforts to achieve large MVDs and to reduce the LWC to a more desirable level.  Studies are currently underway to further improvement and to find a solution to increase the tunnel icing condition inside the Appendix O icing envelope.

Q2: Which ice detectors have been tested by Collins Aerospace?

A2: The Collins IWT was extensively used by the Collins Ice Differentiator Detector (Collins-IDS). Collins Aerospace also allowed the sensor developers in the consortium to test at the Collins-IWT. Unfortunately, several ice detector developers had to change plans not to use Collins IWT due to travel restrictions caused by the Covid-19 pandemic. With the objective to improve icing cloud characterization, the Cloud Combination Probe (CCP) and Nevzorov Probes were also tested in the Collins Aerospace IWT as part of reference measurement activities led by DLR.

Q3: A wide testing envelope represents a key asset in the experimental effort. What were the main testing conditions?

A3: The test conditions were down-selected by the SENS4ICE consortium and tunnel owners. This task was led by Collins Aerospace with the objective of maintaining a high degree of confidence with commonality among other tunnel participants. A comprehensive matrix was used with priorities for different conditions to cover the icing envelopes.

Q4: Can you summarise the test procedures established for SENS4ICE?

Q5: The sanitary measures taken in the framework of the Covid-19 pandemic put a stop to international business travel which means that not all sensor developers in the project could witness the icing wind tunnel tests on-site. In this context, how did you manage the test campaign?

A5: Unfortunately, the unprecedented Covid-19 pandemic caused delays and cancellations in the test schedule. However, Collins Aerospace successfully implemented all the safety procedures and protective equipment for continuation of the tests and tunnel calibration to satisfy the SENS4ICE programme. Collins Aerospace completed the calibration remotely, making use of collaboration tools such as web cameras and video conferencing technology to connect with our international peers. Organisationally, Collins had a clear mission to exceed SENS4ICE expectations and support the programme as well as we could. Truly, a job well done by all involved.

Q6: What are the preliminary observations/ results/ conclusions of the tests from the point of view of the icing wind tunnel operator?

A6: The tunnel delivered what was expected. The results from the  Collins Ice Differentiator Sensor (Collins-IDS) were exceptional, with clear differentiation between dry, Appendix C and Appendix O with higher LWC.  The tests were successful, and most importantly Collins Aerospace was able to safely meet the consortium’s needs and expectations.

Q7: What is the way forward for Collins Aerospace after the SENS4ICE icing wind tunnel test campaign?

A7: Continuous improvement, testing and investment into ice detection technology is the mission of the Collins Aerospace Ice Protection program. The Collins IWT will pick back up with our internal programmes, technology advancement and research that were temporarily put on hold while supporting the SENS4ICE initiative. We expect to have the Collins-IDS back in the tunnel some time before the natural icing flight tests in the first quarter of 2023 to refine the logic for the specific application. It will be another busy year in the tunnel.

Q8: Do you have other comments that you would like to share with the members of the SENS4ICE community?

A8: Collins Aerospace would like to thank SENS4ICE for the opportunity to participate in a such important consortium for improving safety in aerospace. The importance of collaborative programmes emphasizes that 1+1 is more than 2 when everyone works together with the same purpose and objectives. Collins Aerospace expects to continue these collaborations and hopes to support others in the future.

Stay tuned! You will be able to read more about the SENS4ICE Icing Wind Tunnel tests campaign in the upcoming newsletter expected in September 2021.

The information, statements and opinions in the above interview are personal views of the individuals involved in the SENS4ICE project and do not necessarily reflect the views of the SENS4ICE consortium as a whole, nor of the European Commission. None of them shall be liable for any use that may be made of the information contained herein.