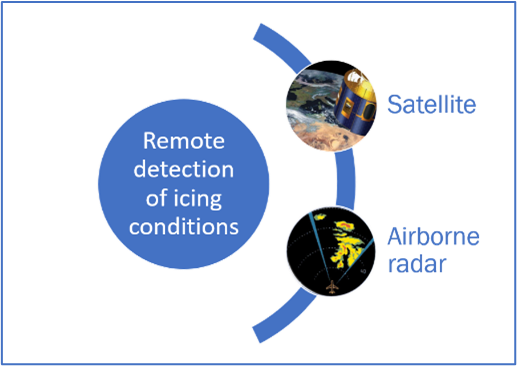 Two different approaches of remote detection of icing conditions were developed with by CIRA and GosNIIAS: the first one based on satellite data, and the second one based on airborne polarimetric weather radar.

Within SENS4ICE work package “Direct and indirect ice detection for App. O”, the main objective of the task “Remote detection of icing conditions” was the early detection of icing conditions, aimed at increasing margins of aviation safety. The partners involved were CIRA (Italy) as the task leader, GosNIIAS (Russia) and ATR (France). Activities within this task were run from the project start, in January 2019, until June 2021. This article will provide insights about the main work performed, challenges and results achieved within this task.

ATR contribution focused on investigating high level needs to prevent the aircraft entry in icing conditions, relying on their experience as turboprops regional aircraft manufacturer. ATR provided high-level requirements to cover three areas: one oriented to the identification of Service requirements, and two, more operational ones, concerning high-level needs for a potential “End User” dealing with Forecast and Display Requirements.

CIRA and GosNIIAS dealt with the development of two different approaches of remote detection of icing conditions: the first one based on satellite data, and the second one based on airborne polarimetric weather radar.

The aim of the remote icing detection tool developed by CIRA is to identify areas potentially affected by in-flight icing hazard, including both App. C and App. O conditions. This tool relies on high-resolution satellite data, with spatial and temporal resolutions of about 3 km and 15 minutes, to remotely infer the properties of clouds.

An example of the graphical output of the tool is shown in the figure below: associated to each pixel of the map, the severity of the icing hazard (light, moderate, severe) is provided with an associated indication of possible SLD conditions. Furthermore, an estimate of the minimum and maximum altitudes affected by the phenomenon is provided.

The major challenge encountered was the lack of suitable in-situ observations of icing conditions necessary to perform a complete validation of the developed product. A qualitative comparison with other meteorological charts was performed, showing a quite good correspondence in the definition of regions affected by icing conditions.

Furthermore, CIRA worked on nowcasting algorithms based on the extrapolation in time of the current weather conditions, detected by satellite data, to perform a forecast over a short period ahead. The importance of an icing nowcasting tool lies in the great need for timely and location-specific forecasts that are relevant for aviation, e.g. for safety reasons or for planning and routing air traffic. Two nowcasting techniques of increasing complexity have been developed and compared. The performance evaluation was performed considering a correlation analysis between forecast and observed images. Both methods have shown satisfactory results. The outcomes of the developed tools of detection and nowcasting will be used in the framework of the work package “Airborne demonstration and atmosphere characterization”, which is dedicated to the technology demonstration in relevant icing conditions.

GosNIIAS investigated the possibility of remote detection of App. C and App. O icing conditions using airborne weather radar and a specific weather classification algorithm. Within the SENS4ICE project, a SLD remote detection algorithm was developed, which is able to analyse the output data from the onboard polarimetric weather radar and to warn the flight crew about possible icing threat due to SLD condition. This remote detection tool is composed of three main algorithms combined with each other: one for the classification of hydrometeors, one for detecting freezing rain and one for detecting freezing drizzle. The main issue encountered has been the lack of suitable information on the presence of freezing rain and freezing drizzle phenomena, together with the general lack of X-band radar data, typical operating band of onboard weather radars. Therefore, simulated polarimetric data for all types of hydrometeors were considered.

The two proposed approaches of icing detection, i.e., satellite-based and weather radar based, showed very different strengths and weaknesses and they can be considered as two complementary methods for the detection and nowcasting of icing conditions: a combination of them could be a challenging and interesting future enhancement of the work carried out in the framework of the SENS4ICE project.

Example of graphical output of the icing detection algorithm based on satellite data. The map is referred to 4th April 2021 at 12:15 UTC.
<< back